Measuring your baby from top to toe with his legs extended, he is about 14 inches/35.6 centimetres. He weighs a little more than 1.6 pounds/ 760 grams. Your baby's eyes begin to open around now. Response to sound grows more consistent toward the end of the seventh month, when the network of nerves to the ear is complete. He also continues to take small breaths and although he's only breathing in water and not air, it's still good practice for when he's born.

Since your baby is now growing so fast, and brain development is so intense at this stage, your nutrition is very important. Continue to eat a well-balanced diet that includes plenty of grains and vegetables. Fibre-rich foods, including whole-grain breads and cereals, lentils and brown rice are high in vitamin B and help fend off constipation. Your antenatal classes should start sometime in the next few weeks, if it hasn't already. Classes should provide you with good, clear information about the birth and the early days of parenthood. Keeping informed goes a long way toward calming any concerns you may have about giving birth. 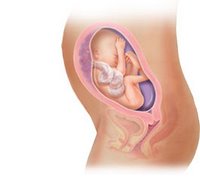 Hi again guys.. that day one of my best friend just commented that I had not been updating my blog *busy busy* hee.. so thought come up with this entry and also to share some thoughts with you guys.. sometimes I still don't believe that I am going to be a mummy.. ya laff at me if you want to but I reckon having baby kicking inside me is such a wonderful feeling, esp when I am not feeling well and I talk to baby about it, then he will kick me to respond. Haha.. guess next time he will only probably dazed at me ba.. :D oh.. and if you were wondering why am I typing this blog in the middle of my working hours? ya I am try to de-stress myself amidst this busiest period of the year.. 180 observations to do, progress report checklist to do, practice concert dance songs with my K1 and K2.. mayb not sounds bad to you but then again I guess being pregnant and to handle all these tasks at the same time is really not an easy job to do.. just wish me the best of luck and hope Nov pass smoothly.. *pray hard* Dec will be a better month.. really looking forwad to Jan when I will start my maternity leave.. *whistle*

Posted by Connie Huang Low at 4:55 PM No comments:

Email ThisBlogThis!Share to TwitterShare to FacebookShare to Pinterest
Labels: My #1, My #2, Pregnancy #1, Siblings' love

Hmm people said being pregnant will set your mood swings.. It is very true cos today is one of the day I felt really cranky..

For some background information, my centre is currently down by two teachers as one got sent back to china due to work permit problem and another one had quitted. Well boss said to cut cost, he said it was UNNECESSARY to employ another two. Ok .. nvm.. LL work.. I try not to go one MC or take leave. But apparently others beg to differ.

Ok for a start to my cranky day, two teachers went on URGENT leave. One had to send the mother to hospital, another one had to go to the hospital. *blood boiling* nvm.. ok.. i swallow.. then morning first lesson of the day, my K1s had to irritate me so much that I "whack" them upside down. Do worksheets never do probably never mind.. chin cai anyhow do want to pass up. *arghhhhhhhh*

nvm! 11 am came and my K2 darlings came.. they were good and clever enuf to "sense" that something was wrong.. but STILL!! they had to play like monkeys in the class! *blood boiling further* fine.. So I tahan somemore.. ok time for lunch.. so they said they want to play, fine! then this irritating boy (R) had to eat his porridge as if it is poison and he happily cough and spilt on my dress.. so I "jumped' on him.. $%$%&$%#^^ so angry.. lucky he half day if no I sure peng on the spot. Then these K2 children happily played at the block corner. Noise level very high .. nvm.. I tahan somemore.. ask them to pack as they are goin for nap time.. again throw the soft blocks ALL OVER the place.. *messssssssssy* I tahan somemore.. go back to class, they had to climbed onto the shelf in the mattress cupboard to get the mattress and this other boy (JX) had to make some funny noise in the class.. *ok time for me to explode* I cannot tahan anymore.. I immediately made JX stand at a corner of the class.. then he "diao" me ok? Simply pissed me off.. I then told the class that they are goin to get punished for the rest of the week.. no play allowed after lunch for one week!

Finally.. most of them asleep now.. only left this talkative girl (Alt) making monkey faces at another girl (MT).. *roll eyes*.. give you all time to sleep, dun want to sleep then later complain very tired.. what do you all want?

people say being pregnant, we should try to maintain our cool and smile more. But frankly speaking, we are not saint ok? And usually these "people" who said those theories are not the in the teaching line so it is ALWAYS very easy to say. You try to put yourself in my shoes.. or count the number of "I tahan somemore" in my blog, you would really think I am tryin to keep my cool. But sometimes the kids are so irritating that they can make you explode.

ok decided! later not goin to teach.. no point.. if not my yelling wun stop. Tmr got mooncake festival celebration in school somemore, imagine we have to work 12 hours straight! next week I SURE take treat you all MC. *confirmed staff liao entitled to 14 days MC* neh neh.. :D
Posted by Connie Huang Low at 1:24 PM 1 comment: 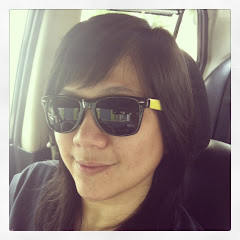 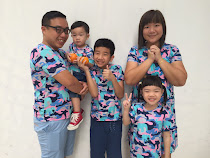